The growth of plants occurs only in certain specific regions. This is because the dividing tissue, also known as meristematic tissue, is located only at these points. Depending on the region where they are present,meristematic tissues are classified as apical,lateral and intercalary. New cells produced by meristem are initially like those of meristem itself, but as they grow and mature, their characteristics slowly change and they become diferentiated as components of other tissues.


Apical meristem is present at the growingtips of stems and roots and increases thelength of the stem and the root. The girth ofthe stem or root increases due to lateral meristem (cambium). Intercalary meristem is the meristem at the base of the leaves or internodes (on either side of the node) or twigs.
Cells of the meristematic tissues show the following features:

Permanent tissues in plants are divided into simple permanent and complex permanent tissues.Simple permanent tissues are again divided into three types. They are Parenchyma,Collenchyma and Sclerenchyma.
PARENCHYMA TISSUE:
Cells formed by meristematic tissue take up a specific role and lose the ability to divide. As a result,they form a permanent tissue. This processof taking up a permanent shape,size and function is called differentiation. Cells of meristematic tissue differentiate to form different types of permanent tissue.
Parenchyma, in plants, tissue typically composed of living cells that are thin-walled, unspecialized in structure, and therefore adaptable, with differentiation, to various functions. Parenchyma may be compact or have extensive spaces between the cells. It is often called ground, or fundamental, tissue and makes up the mesophyll (internal layers) of leaves and the cortex (outer layers) and pith (innermost layers) of stems and roots; it also forms the soft tissues of fruits. Cells of this type are also contained in xylem and phloem as transfer cells and, with both xylem and phloem as bundle sheaths, the cells that surround the vascular strands. 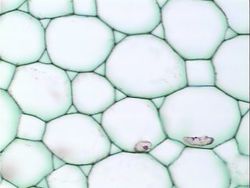 Parenchyma tissue is composed of loosely packed thin wall cells so that large spaces between cells(intercellular spaces) are found in this tissue. This tissue provides support to plants and also stores food. In some situations, it contains chlorophyll and performs photosynthesis, and then it is called chlorenchyma. In aquatic plants like pistia and lotus, large air cavities are present in parenchyma to give buoyancy to the plants to help them float.Such a parenchyma type is called aerenchyma. The parenchyma of stems and roots also stores nutrients and water.


COLLENCHYMA TISSUE:
The flexibility in plants is due to another permanent tissue, collenchyma. It allows easy bending in various parts of a plant (leaf,stem,petiole) without breaking. It also provides mechanical support to plants. We can find this tissue in leaf stalks below the epidermis.The cells of this tissue are living, elongated and irregularly thickened at the corners. There is very little intercellular space.The cell wall is made up of cellulose and pectin. 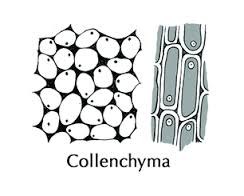 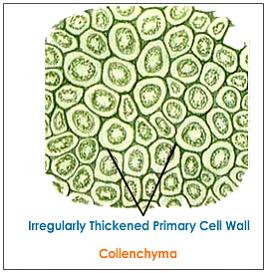 SCLERENCHYMA:
Sclerenchyma is the tissue which makes the plant hard and stiff. We have seen the husk of a coconut. It is made of sclerenchymatous tissue. The cells of this tissue are dead. They are long and narrow as the walls are thickened due to lignin. Often these walls are so thick that there is no internal space inside the cell. This tissue is present in stems, around vascular bundles, in the veins of leaves and in the hard covering of seeds and nuts. It provides strength to the plant parts.
The cell wall of sclerenchyma cells in plants like jute and hemp contain elongated, thread like thick walled cells called fibres.Since fibres are flexible and elastic they are used in coir industries to make gunny bags and ropes.
Sclerieds are hard cells having more lignin.Hence they are commonly called stone cells.They are generally found in fruit wall and seed coats. 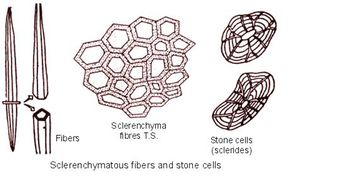 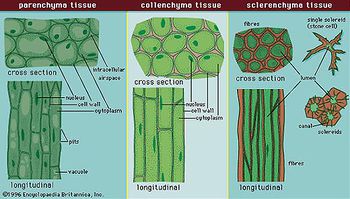 DERMAL TISSUE:
The outermost covering of all parts of plant-stem,leaves,flowers,fruits,seeds and roots- is formed by protective tissue called Dermal tissue.The epidermis is usually made of a single layer of cells. In some plants living in very dry habitats, the epidermis may be thicker since protection against water loss is critical. The entire surface of a plant has this outer covering of epidermis. It protects all the parts of the plant.Epidermal cells on the aerial parts of the plant often secrete a waxy, water-resistant layer cutin on their outer surface. This aids in protection against loss of water, mechanical injury and invasion by parasitic fungi.
We can observe small pores here and there in the epidermis of the leaf. These pores are called stomata. Stomata are enclosed by two kidney-shaped cells called guard cells. They are necessary for exchanging gases with the atmosphere.Transpiration (loss of water in the form of water vapour) also takes place through stomata.
Epidermal cells of the roots, whose function is water absorption, commonly bear long hair-like parts that greatly increase the total absorptive surface area.
In some plants like desert plants,cabbage,banana etc. epidermis has a thick waxy coating of cutin on its outer surface to prevent water loss.

Complex permanent tissues are mainly of two types.They are water conducting xylem and food conducting phloem.Hence they are together called vascular tissues
XYLEM
Xylem is a vascular tissue which transports water and minerals absorbed by the roots,to all parts of the plant, especially to the leaves.Hence it is called water conducting tissue.
Xylem consists of tracheids,vessels,xylem parenchyma anf xylem fibres.The cells have thick walls and many of them are dead cells.
Tracheids and vessels are tubular structures which help in transport of water and minerals vertically.Vessels consist of sries of elongated cells joined end to end to form tube like structures.
The xylem parenchyma stores food and helps in the sideways conduction of water.Xylem fibres are mainly supportive in function. 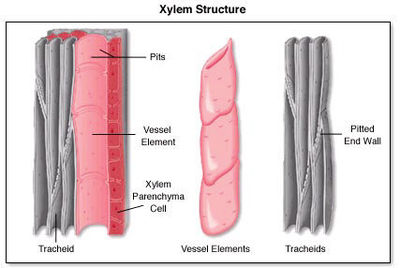 PHLOEM
Phloem is a complex tissue which conducts food to different parts of the plant.It is made up of four types of elements: sieve tubes, companion cells,phloem fibres and the phloem parenchyma.
Sieve tubes are tubular cells with perforated walls called sieve plate.Phloem is unlike xylem in that materials can move in both directions in it. Phloem transports food from leaves to other parts of the plant.
There are certain cells closely associated with sieve tube,called companion cells.They regulate the passage of food through sieve tubes. Except for phloem fibres, phloem cells are living cells. 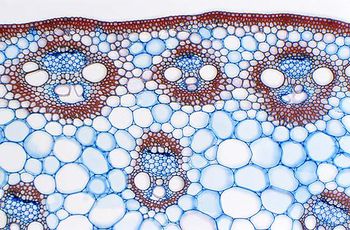 Figure showing arrangement of vascular bundles in a corn stem