When an object is in equilibrium, it only experiences the gravitational and restoring force/ Weight is mass multiplied by the acceleration due t gravity

Concepts of heaviness (weight) and lightness (levity) date back to the ancient Greek philosophers. These were typically viewed as inherent properties of objects. Plato described weight as the natural tendency of objects to seek their kin. To Aristotle weight and levity represented the tendency to restore the natural order of the basic elements: air, earth, fire and water. He ascribed absolute weight to earth and absolute levity to fire. Archimedes saw weight as a quality opposed to buoyancy, with the conflict between the two determining if an object sinks or floats. The first operational definition of weight was given by Euclid, who defined weight as: "weight is the heaviness or lightness of one thing, compared to another, as measured by a balance.". Satellites and weightlessness


Significance of the gravitational force

Accurate measurements on the orbits of the plantes indicated that they did not precisely follow Kepler's laws. Slight deviations from perfectly elliptical orbits were observed. Newton was aware that this was to be expected from the Law of Universal Gravitation. The derivation of perfectly elliptical ignores the forces due to the other planets. These deviations called perturbations are observed and led to the discovery of Neptune and Pluto. Planets around distant stars were also inferred from the regular wobble of each star due to the gravitational attraction of the revolving plant.

Objective: To understand the nature of gravitational force

Ask the children to think about what will happen if we had a hollow tunnel running through the centre of the Earth and we dropped a ball into it. What will happen to the ball?

Let us study this picture below and analyze what happens in each of the cases.

In the first case, the ball is just dropped from the cliff and it falls down in a straight line, subject to the force of gravity. In the second and third instances, the ball is thrown upwards, reaches a certain height and still falls down. In the third case, the ball covers a horizontal range as well.

In all these cases, gravity is the only force acting. Without gravity, we could throw a rock upwards at an angle and it follow a straight line path. Because of gravity, however, the path curves.

Such an object, when thrown/ projected and continues its motion on its own inertia is called a projectile. A projectile will have two components to ots velocity – the horizontal and the vertical. The horizontal component is similar to an object rolling on a plane/ along a straight line. The vertical component of the velocity is subject to the acceleration due to gravity. A projectile moves horizontally as it moves downwards or upwards.

Imagine throwing a ball straight up. It will fall down to the same place. In this case the ball has a velocity in the vertical direction which changes with time as the force due to gravity causes an acceleration in the downward direction all the time. But suppose on were to throw a ball with only a horizontal velocity. The ball will now move with a velocity that has two components to it - one the horizontal velocity which remains unchanged as long as there is no force such as air resistance acting on it and a vertical velocity that is continually changing. This vertical velocity starts at zero - we threw the ball horizontally - and keeps increasing with an acceleration g.

The resultant velocity is a combination of the two. This is what causes objects to follow a parabolic path when they are thrown with a combination of horizontal and vertical velocities. The greater the horizontal component the farther the ball will travel. For short distances, and small velocities, the curvature of the Earth will make no difference. But suppose that we throw it so hard that the horizontal distance is very large and we can no longer ignore the curvature of the Earth?

The satellite and everything in it are constantly falling towards the Earth but will never reach it. Since they are all falling with the same velocity, the satellite does not exert any force on the objects or people inside. The people inside, therefore feel weightless. remember we have a sense of weight because of the Normal force. Here the Normal force is zero and so we feel weightless.

An Earth satellite is simply a projectile that falls around the Earth rather than into it. That means the horizontal falling distance matches the Earths curvature. Geometrically, the curvature of the surface is that its surface drops a vertical distance of 5 metres for every 8000 metres tangent to the surface.

Therefore, if we throw a rock or a ball at a high enough speed (about 29000 km/s), it would follow the curvature of the Earth. But at this speed, atmospheric friction (due to air drag) would burn up everything. This is why satellites are launched at an altitude high enough for the air drag to be negligible.

Satellite motion was understood by Newton who reasoned that the Moon was simply a projectile that was circling the Earth.

The following simulation can illustrate how satellite motion takes place.

We now know that satellites are continually falling towards the Earth following a curved path whose curvature is greater than that of the curvature of the Earth. The Moon is just such a satellite that moves around the Earth. In a similar way, all the planets that move around the Sun are satellites of the Sun. The motion described in such a situation is not strictly circular - it is elliptical.

Johannes Kepler, working with data painstakingly collected by Tycho Brahe without the aid of a telescope, developed three laws which described the motion of the planets across the sky.

1. The Law of Orbits: All planets move in elliptical orbits, with the sun at one focus.

2. The Law of Areas: Each planet moves so that an imaginary line drawn from the Sun to the planet sweeps out equal areas in equal periods of time.

3. The Law of Periods: The square of the period of any planet is proportional to the cube of the semimajor axis of its orbit.

Kepler's laws were derived for orbits around the sun, but they apply to satellite orbits as well.


The Law of Orbits

Kepler's second law states that each planet moves so that an imaginary line drawn from the Sun to the planet sweeps out equal areas in equal periods of time.

This can be shown to be true using the law of conservation of angular momentum. 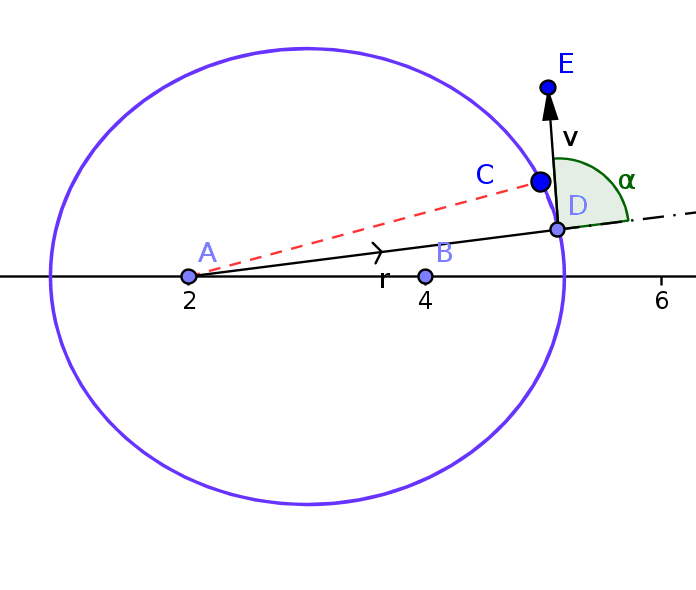 The magnitude of the angular momentum of the planet about the Sun is L = mvr sinα.


The Law of Periods

Can you derive this?

5. www.hyperphysics.com - From Classical Mechanics to General Relativity - This is a good description of the geometry of Newtonian gravity and how to move from classical mechanics to relativity.

8. http://www.physicsclassroom.com/Class/circles/U6L4b.cfm -This website describes the mathematics of orbital motion.