1. Habitat and size of Bacteria.
2. Classification of bacteria (based on shapes)
3. Structure of bacteria.
4.Metabolism in Bacteria( Nutrition and Reproduction)
5. Effects of Bacteria

Habitat and size of bacteria:

2. Classification of bacteria on the basis of shapes:
Content: Teaching Outlines.
Bacteria are neither plant nor animal. Both bacteria and plants have rigid cell walls, but unlike plants,
most kinds of bacteria move about and use organic foods for energy and growth; only a few use photosynthesis.
On the basis of their shapes,bacteria may be grouped into three main type; 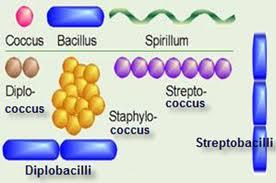 other kind of bacteria, the mycoplasmas, have no rigid cell walls and consequently are called pleuropneumonialike organisms,
because they cause a contagious pneumonia in cows and human beings.
3) Structure of Bacteria :
Structure of Bacterial Cell
Bacterial is very small, simple unicellular organisms with a length varying from 2 to 5.
On the basis of shape bacteria are either coccus (spherical), bacillus (rod shape), spirillum (spiral) or vibro (comma) types.
On the basis of arrangement of flagella, these may be atrichous (flagellum absent)
monotrichous (one flagellum at one end), leptotrichous (bunch of flagella on one side), amphitrichous (flagella on whole surface).
Internal structure: 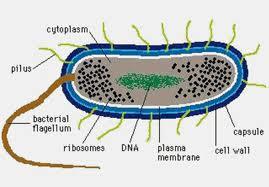 Bacterial cell is surrounded by a prominent cell wall constituted by polysaccharides, lipids and proteins.
The cell wall is permeable to water and ions of small molecules.
Slime layer and capsule:
Some bacterial cells are completely enveloped by a slimy layer, which is relatively thick to form the capsule. Capsulated bacteria are more harmful. Capsule protects the cell from antibodies and desiccation.
Mesosomes:
Mesosomes take part in aerobic respiration and it is found in gram positive bacteria. The protoplasm is either transparent or granular.
Protoplasm:
Below the cell wall, the plasma membrane is present. Plasma membrane at certain points forms coiled invaginations called Mesosomes.
Cytoplasm:
Cytoplasm is composed of complex proteins, lipids and mineral, nucleic acid and water.
Glycogen is the reserve food material. It contains 70S type of ribosomes.
Other organelles like endoplasmic reticulum, mitochondria; Golgi complex, etc. are absent.
However, in photosynthetic bacteria some pigments are present (bacterio chlorophyll).
Nucleoid:
Bacteria are prokaryotes, there is no well-organised nucleus. Nuclear membrane and nucleolus are absent.
At the center there is a clear zone called nucleoid where only a single naked chromosome (without histone protein, only DNA)
is present in a very much coiled form.
Episomes
In addition to the DNA in some bacterial cells an additional circular DNA is present in the cytoplasm. It is called as episome or plasmid.


Metabolism- Some substances are broken down for energy for vital processes while others are synthesized for necessities of life. ,br.This is called Metabolism. It is a chemical process necessary for the maintenance of life.
Nutrition Nutrition is a process, in order for an organism to sustain life, to obtain food with life supporting substances that can be digested and used by the organism. Mode of Nutrition:‎
Nutrition in bacteria are either autotrophs or heterotrophs.
Autotrophic bacteria are again divided into two groups;
(i) Photoautorophs trap solar energy for utilization CO2 and use H2S in place of H2O. Thus, O2 is never released.
(ii) Chemoautotrophs obtain energy from chemical by oxidation process for food synthesis and carbon from CO2.
This type include nitrifying bacteria, sulphur bacteria, iron bacteria etc.
Heterotrophs are also of two types- Photoheterotrophs and chemoheterotrophs.
Photoheterotrophs use light as energy source and an organic compound as source of carbon, e.g. Green and purple bacteria.
Chemoheterotrophs use chemical as energy and carbon may also be obtained from the same organic substances.
Most of the bacteria belong to this type.

The sexual or asexual process by which organisms generate new individuals of the same kind is reproduction.
Asexual Reproduction Asexual is a form of where an animal can make its own offspring with no mate. Asexual is the primary form of reproduction.
Asexual reproduction in bacteria is very simple. The cell increases in size. A double wall develops across the midline of the enlarged cell.
The cell separates into two cells at the midline wall.
Each cell is then able to function as a separate entity. The process of multiplication can be quite rapid.
The bacterium E. coli may double in number every 20 minutes in ideal conditions. If you plot the graph of population over time, you get an exponential increase.
Sexual reproduction Sex in bacteria differs somewhat from what we consider sex in eukaryotes. It involves the plasmid, which has several important characteristics:
1. A plasmid is a loop of DNA. Plasmids can multiply autonomously within the cell. Thus we may find from zero to many of one or more plasmids in each cell.
2. Many plasmids can insert into the DNA of the nucleus, and detach from it. In doing so,
the plasmid may leave part of the plasmid DNA behind, and take some of the nuclear DNA with it.
3. plasmids can transfer from cell to cell. The cells need not be of the same bacterial 'species'.

Bacteria play important roles in different fields such as agriculture, industry etc. Some of them are mentioned below:

a)  Scavenging Role Saprophytic bacteria obtain food from organic remains such as animal excreta, fallen leaves, meat etc.
They decompose these substances by action of digestive enzymes aerobically or anaerobically (known as fermentation).
Thus they help in sanitation of nature, so also known as scavengers. E.g. Pseudomonas
b)   Nitrification Rhizobium bacteria, living in root nodules of leguminous plant symbiotically, helps in fixing atmospheric nitrogen.
Similarly, Nitrosomanas and Nitrococcus convert ammonium salt to nitrites.
Nitrites are further changed to nitrates by Nitrobacter and Nitrocystis. It enables plants to uptake nitrogen.
c)     Production of Organic Manure As stated above, saprophytic bacteria help in breaking of complex organic substance to simpler forms.
Thus, in this process, they help to convert farm refuse, dung and other wastes to manure.
d)  Preparation of Ensilage Ensilage is preserved cattle fodder prepared by packing fresh chopped fodder sprinkled with molasses.
Fermentation activity of bacteria produces lactic acid that acts as preservative in ensilage.
e)    Production of fuel Bacteria, while converting animal dung and other organic wastes to manure, help in production of fuel that is a must in gobar gas plant.
f)    Disposal of sewage Bacteria help in disposal of sewage by decomposing it and thus, help in environmental sanitation.

a)  Dairy Industry Bacteria such as Streptococcus lactis convert milk sugar lactose into lactic acid that coagulates casein (milk protein).
Then, milk is converted into curd, yoghurt, cheese etc needed for the industry.
b) Production of Organic Compounds Fermentation (breakdown of carbohydrate in absence of oxygen) action of various bacteria produces organic
compounds like lactic acid (by Lactobacillus), acetic acid (by Acetobacter aceti), acetone (by Clostridium acetabutylicum) etc.
c)     Fibre Retting The action of some bacteria like Clostridium, Pseudomonas etc. help in fibre retting
i.e. separation of stem and leaf fibre of plants from other softer tissue.
d)   Curing The leaves of tea and tobacco, beans of coffee and coca are cured off their bitterness with the help of action of certain bacteria such as Bacillus megatherium.
e) Production of Antibiotics Number of anti bacterial and anti fungal antibiotics such as Hamycin, Polymyxin, Trichomycin etc are obtained from
mycelia bacteria (like Streptomyces). Similarly, Bacillus is used for production of antibiotics such as Bacitracin, Gramicidin etc
f)  Production of Vitamins Different kinds of vitamins are produced from bacteria like Riboflavin from Clostridium butylicum, Vitamin B12 from Bacillus megatherium and Vitamin K and B-complex from Escherichia coli.

Though bacteria plays important role in agriculture, industries and natural sanitation etc, it has the following harmful effects:
a)   Food Spoiling Saprophytic bacteria always not only help in decomposition of dead matters, but they also cause the rotting of vegetables,
fruits, meat, bread etc.
b)  Food Poisoning Bacteria like Staphylococcus aureus cause food poisoning and cause people diarrhea and vomiting.
c)   Damaging of domestic articles Spirochete cytophaga deteriorates cotton, leather and wooden articles.
d) Denitrification Bacteria such as Thiobacillus and Microbacillusconvert nitrate of the soil to the gaseous nitrogen. This hampers plants very much.
e)   Desulphurication Bacteria such as Desulfovibrio convert soil sulphates into hydrogen sulphide.
f)   Cause of Diseases It is known that over 90% of human diseases and over 10% of plant diseases are caused by bacteria.

Teacher can introduce the lesson on bacteria by giving a brief introduction about monera and prokaryotes.
( Internal link the lesson Click here File:1. introduction to monera.pdf
Introduction to monera for reference).
Refer this link to show bacteria on Human Body and its effects.[1]
It is better if teachers refer the websites concerned to the topic . Few links are given in web resources heading.
4. Teacher Should be familiar with the meaning of following terms related to bacteria.
Words to Know
1.Aerobic bacteria: Bacteria that need oxygen in order to live and grow.
2.Anaerobic bacteria: Bacteria that do not require oxygen in order to live and grow.
3. Bacillus: A type of bacterium with a rodlike shape.
4. Capsule: A thick, jelly-like material that surrounds the surface of some bacteria cells.
5. Coccus: A type of bacterium with a spherical (round) shape.
6. Decomposers: Bacteria that break down dead organic matter.
7. Fimbriae: Short, hairlike projections that may form on the outer surface of a bacterial cell.
8. Fission: A form of reproduction in which a single cell divides to form two new cells.
9. Flagella: Whiplike projections on the surface of bacterial cells that make movement possible.
10. Pasteurization: A process by which bacteria in food are killed by heating the food to a particular temperature for some given period of time.
11. Pili: Projections that join pairs of bacteria together, making possible the transfer of genetic material between them.
12. Prokaryote: A cell that has no distinct nucleus.
13. Spirilla: A type of bacterium with a spiral shape.
14. Spirochetes: A type of bacterium with a spiral shape.
15. Toxin: A poisonous chemical.
16. Vibrio: A type of bacterium with a comma-like shape. 0


Teacher can develop the lesson by --

Thus students can get clear idea that bacteria are found everywhere.

Procedure:Add lemon juice to a cup of milk . See the changes. Milk changes into curds.
How did this change take place? (Lactococcus lactis is a microbe classified informally as a Lactic Acid Bacterium
because it ferments milk sugar (lactose) to lactic acid.)

Evaluation: What changes do you find when lemon juice is added to milk? Is there change in the taste? Why did this change take place?

1. Browse the web and prepare the presentation on habitat and types of bacteria.
2. Draw the different shapes of bacteria on drawing sheet , name them and display in class room.
3. Why does the milk get spoilt during summer? Does it get spoilt if we boil milk? If not, why?
4. Similarly which food items get spoilt soon? Why?
Questions corner.After going through the images and seeing the picture, what can we conclude about habitat of bacteria?
Are they found even on your body?!

Do this activity at home: About a cup of milk is taken in a vessel & kept for 1-2days. Similarly A lemon is cut into halves and kept for 2days.
After 2 days students will observe the changes and give the reasons for the change.)
Evaluation Activity: CCE

Refer this link . Print the worksheets for Evaluation.Worksheet for Bacteria
Refer this picture and prepare notes on harmful bacteria, their effects on human body[3]