A solar cell (also called a photovoltaic cell) is an electrical device that converts the energy of light directly into electricity by the photovoltaic effect. It is a form of photoelectric cell, defined as a device whose electrical characteristics—e.g. current, voltage, or resistance—vary when exposed to light.

Cells can be described as photovoltaic even when the light source is not necessarily sunlight (lamplight, artificial light, etc.) Photovoltaic cells are used as a photodetector (for example infrared detectors), detecting light or other electromagnetic radiation near the visible range, or measuring light intensity. 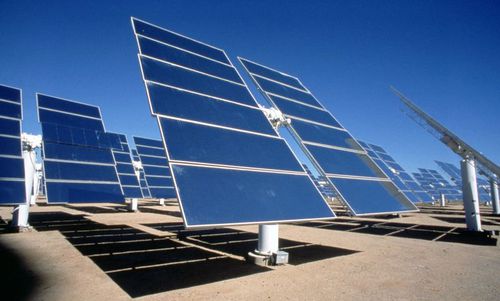 A solar thermal collector collects heat by absorbing sunlight. A collector is a device for capturing solar radiation. Solar radiation is energy in the form of electromagnetic radiation from the infrared (long) to the ultraviolet (short) wavelengths. The quantity of solar energy striking the Earth's surface averages about 1,000 watts per square meter under clear skies, depending upon weather conditions, location and orientation.

The term solar collector commonly refers to solar hot water panels, but may refer to installations such as solar parabolic troughs and solar towers; or basic installations such as solar air heaters. Solar power A solar cell (also called a photovoltaic cell) is an electrical device that converts the energy of light directly into electricity by the photovoltaic effect. It is a form of photoelectric cell, defined as a device whose electrical characteristics—e.g. current, voltage, or resistance—vary when exposed to light.

Cells can be described as photovoltaic even when the light source is not necessarily sunlight (lamplight, artificial light, etc.) Photovoltaic cells are used as a photodetector (for example infrared detectors), detecting light or other electromagnetic radiation near the visible range, or measuring light intensity.


A solar pond is simply a pool of saltwater which collects and stores solar thermal energy.
The saltwater naturally forms a vertical salinity gradient also known as a halocline, in which low-salinity water floats on top of high-salinity water. The layers of salt solutions increase in concentration with depth. Below a certain depth, the solution has a uniformly high salt concentration. There are 3 distinct layers of water in the pond:

If the water is relatively translucent, and the pond's bottom has high optical absorption, then nearly all of the incident solar radiation (sunlight) will go into heating the bottom layer. When solar energy is absorbed in the water, its temperature increases, causing thermal expansion and reduced density. If the water were fresh, the low-density warm water would float to the surface, causing a convection current. The temperature gradient alone causes a density gradient that decreases with depth. However the salinity gradient forms a density gradient that increases with depth, and this counteracts the temperature gradient, thus preventing heat in the lower layers from moving upwards by convection and leaving the pond. This means that the temperature at the bottom of the pond will rise to over 90 °C while the temperature at the top of the pond is usually around 30 °C. You can see solar lake in buch in gujarath. The heat trapped in the salty bottom layer can be used for many different purposes, such as the heating of buildings or industrial hot water or to drive an organic Rankine cycle turbine or Stirling engine for generating electricity.

Biodiesel refers to a vegetable oil- or animal fat-based diesel fuel consisting of long-chain alkyl (methyl, ethyl, or propyl) esters. Biodiesel is typically made by chemically reacting lipids (e.g., vegetable oil, animal fat with an alcohol producing fatty acid esters. Biodiesel is meant to be used in standard diesel engines and is thus distinct from the vegetable and waste oils used to fuel converted diesel engines.

Bioenergy is renewable energy made available from materials derived from biological sources. Biomass is any organic material which has stored sunlight in the form of chemical energy. As a fuel it may include wood, wood waste, straw, manure, sugarcane, and many other byproducts from a variety of agricultural processes In its most narrow sense it is a synonym to biofuel, which is fuel derived from biological sources. In its broader sense it includes biomass, the biological material used as a biofuel, as well as the social, economic, scientific and technical fields associated with using biological sources for energy. This is a common misconception, as bioenergy is the energy extracted from the biomass, as the biomass is the fuel and the bioenergy is the energy contained in the fuel

wind energy A windmill is a machine that converts the energy of wind into rotational energy by means of vanes called sails or blades. The reason for the name "windmill" is that the devices originally were developed for milling grain for food production; the name stuck when in the course of history, windmill machinery was adapted to supply power for many industrial and agricultural needs other than milling. The majority of modern windmills take the form of wind turbines used to generate electricity, or windpumps used to pump water, either for land drainage or to extract groundwater.

tidal energy Tidal power, also called tidal energy, is a form of hydropower that converts the energy of tides into useful forms of power, mainly electricity.

Although not yet widely used, tidal power has potential for future electricity generation. Tides are more predictable than wind energy and solar power. Among sources of renewable energy, tidal power has traditionally suffered from relatively high cost and limited availability of sites with sufficiently high tidal ranges or flow velocities, thus constricting its total availability. However, many recent technological developments and improvements, both in design (e.g. dynamic tidal power, tidal lagoons) and turbine technology (e.g. new axial turbines, cross flow turbines), indicate that the total availability of tidal power may be much higher than previously assumed, and that economic and environmental costs may be brought down to competitive

Introduction Alternative resources of enrgy are solar energy, bio energy, bio diesel wind energy wave energy geo termal energy.the main purpose for the studing alternative energy is day by day sources of energy are depliting rapidly due to the increased population.So we are looking towards the alternative energy resources . In this regard the alternative energy are the important issue now
We get enery from the sun in the form of solar radiation.It reaches the earth in the form of small wave packets called photons[6].The source of solar energy is continuous thermo nuclear fussion[7] taking place in the sun.